MUSINGS FROM PRIYADARSHINI KARVE: What have we achieved?

I am currently on assignment in Nepal, trying to understand the challenges and opportunities of clean cooking energy sector there. It is also giving me insights into the evolution of the sector in India.

Clean cooking technologies ideally include everything from LPG and induction stoves to smokeless (as defined by emission standards of each country) wood/biomass fueled stoves. The idea here is that if cooking is happening without causing pollution, it is a healthier environment for the cook and other residents. This is desirable for everyone, but unfortunately most clean cooking solutions are beyond the means of the poor in developing countries. For decades, focused efforts have been carried out in almost all developing countries to change this situation. These efforts have been propped up by governments as well as national and international donor agencies in each country. Unfortunately, in spite of this, billions of people across the world continue to cook on smoky biomass fires.

In India, from early 1980s to 2000s the Government of India conducted the national programme on improved chulha. Under this programme millions of improved mud/cement stoves with chimney were distributed free of cost to rural poor households. These type of stoves while continuing to consume the same wood or biomass fuels as traditional stoves, reduce fuel consumption. In addition, they firstly produce less smoke than traditional stoves, and secondly remove the smoke from the kitchen through the chimney. The stoves used to be constructed by local rural 'self employed workers'. These people were either unemployed youth, or self help group member women, or traditional potters, masons, etc. The activity of installing the stoves as per the direction of the district administration every year, earned them a small amount of money.

In 2002 the Ministry of New and Renewable Energy stopped funding this programme. With the exception of a couple of states, most state governments also therefore stopped implementing it. This was also the time when across the world 'commercalisation' became the mantra for the improved cook stove sector. Everyone started citing example of the improved cook stove programme in China which had focused on creating improved stove manufacturing enterprises rather than distributing improved cook stoves for free. In India, with the sudden and total withdrawal of the government, a vacuum was created. In this vacuum arose Samuchit Enviro Tech, which became the first company in India to attempt selling improved cook stoves as a consumer product to rural households. Other players were also attracted to this market, and over the years several giants have grown in this sector, although we at Samuchit have evolved in directions different from our original objective. But looking at the overall ecosystem today, one can say that the sector of household improved cook stoves is now commercialised in India.

However, what has this really achieved? Does this mean that potential end users are flocking to some shops to buy improved cook stoves? Unfortunately the answer is no.

In the government programme nobody asked the user what she wanted and needed. At this point too, nobody is asking the user this question.

In the government programme the targeted end user (the woman who is cooking all the meals for her family exclusively on fire wood or other biomass fuels) got some improved stove that may or may not have been totally acceptable to her, free of cost. Today too it is the same situation - she is still getting some improved stove free of cost, which may or may not find any use in her kitchen.

So if the government is not paying for the stoves, and if the stove enterprises are not doing any charity, how is this happening? This is now happening through CSR programmes of big corporations and other donor driven initiatives. As far as the end user is concerned, the subsidy regime has continued, only the faces behind the programme have changed.


So what has changed, if any??

Earlier, most of the stoves disseminated were mud/cement stoves and used to be constructed by some poor person who lived in the vicinity of the end user. This activity provided a partial livelihood for thousands of poor people. A few enterprising self-employed workers had used this opportunity to come out of poverty and earn a steady income, while providing livelihood to other poor persons around them. Now, primarily for the ease of mass manufacturing, metallic stoves are being distributed. The activity is creating profits for a few urban businessmen and women, and some foreign investors, and employment for a few mechanics (who are employable in any fabrication industry any way).

This is India's big achievement with the shift to commercialisation of improved cook stoves!

Roughly one third of the food produced in the world for human consum- ption every year — approximately 1.3 billion tons — gets lost or wasted. - Food and Agriculture Organization

Food is a basic necessity for all humans. Still millions of people in the world go to sleep hungry, yet another million waste their food! The United Nations Food and Agriculture Organization estimates that about 795 million people of the 7.3 billion people in the world, or one in nine, were suffering from chronic under nourishment in 2014-2016. In 2014, India was ranked 55 in the global Hunger Index out of 76 nations. It made some progress from previous 63rd position but the hunger status remains classifies as ‘serious’. Public health foundation of India estimates that India is home to a third of the world’s stunted children.  It’s an irony that in the same India upto 40% of food produced is wasted (UNDP) and about 50% of all food across the world meets the same fate.

The twin problems of hunger and food waste resonate across the globe. One in seven Americans lack reliable access to food, and an extra 15 percent in saved food could feed over 25 million Americans (NRDC).Recently French national assembly voted unanimously to pass legislation that prevents supermarkets from throwing away or destroying unsold food and must donate it to charities.

In Pune, 30% population live in slums, many of whom are pavement dwellers. There are thousands of people who struggle to get 1 day meal and there are tonnes of leftover food from hotels, marriages, events etc.
Excess food from many such events or hotels goes waste because people don’t know what to do with it. Pune has organizations like Robinhood Army and Feeding India that collects your excess food and distribute it to needy.

Robin Hood Army is a volunteer based organisation that works to get surplus food from restaurants/ events to the less fortunate sections of society in cities. Pune’s RHA chapter is very active. Currently they have 3 food distribution drives every week- Fridays at Akurdi area, Saturdays at Deccan area and Sundays at camp. The volunteers can help with  a) Approaching Restaurants/Hotels/Caterers to explain about RHA and get them on board b) Scouting new areas for food distribution c) Collecting food from the restaurants and distributing this food among the hungry and less fortunate during distribution drives. I have been to the Deccan drive. Volunteers meet at 6.30pm infront of Congress Bhavan and from there they proceed to the pavement dwellers with food. There are lot of youngsters contributing their time and energy for this. It is wonderful to see how the kids on pavements gets excited seeing us. We talk, interact and distribute food. After one area is covered, we move to the next area. The drive gets over at around 8 pm.  RHA also collects excess food from events, ceremonies etc. and distribute it.

So if you or your friends ever have excess food do contact them. Also be a volunteer by registering in the website or come for a drive and get to know the work more.
Robinhood army:
http://robinhoodarmy.com/
http://facebook.com/RobinHoodArmy
In Pune (if you have excess food) - Contact Mr Rathi - 09422987508
Feeding India:

PS:  Recently I went for an event where there was plenty of food with variety of options. We were in no hurry and there was ample food for all. After 2 serves I was full, but again I filled my plate thinking I can finish it but at the end , I just had a single spoon rice from it and rest of my filled plate was left untouched. I turned around and saw  the same left over food plates..Then I realized it’s the attitude that needs change. Wasting is a habit which needs to be changed consciously !
I have pledged never to waste food again! I will Think before filling my plate, Eat and Save! 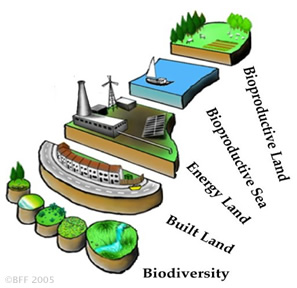 We have a finite planet. The total area of the earth is 510.1 x 10^6 sq km. The total population of the earth today is about 7 billion persons. Today the minimum estimate of ecological footprint of humanity is about 1.3 times the area of the earth. So obviously, we are living beyond our means. If we have to manage within the limits of our planet, the area allocation per person works out to about 73,000 sq m.

To get a sense of how much land this is, we can consider the following. The area of a football field is approximately 100 m x 100 m or 10,000 sq m. Thus, the area allocation per person is equivalent to about 7.3 football fields.

Why is it that we are finding it so difficult to sustain ourselves on this much land per person??