On 22nd March we saw world water day. I am sure all of us are taking efforts to save the visible sources of water. However, I think as a citizen we can save more water that is not visible. Since water is required in the preparation of almost everything, if we start consuming consciously. We can still save a lot of water. The below image shows the amount of water required in the production of these products and thus seem to be invisible. 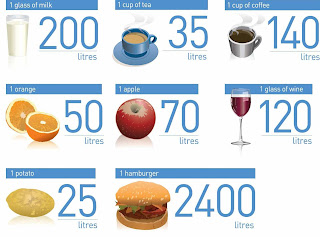 Pune is one of the SMART cities and is still facing the challenges of managing waste in the city. I think its time we start taking management lessons from sustainable initiatives undertaken by small towns in making waste management a miracle. One such story is about a small town named Vengurla around 400 km from Pune under the leadership of Mr. Ramdas Kokare.


Mr. Ramdas Kokare the former Chief Municipal Officer of Vengurla (now posted at Karjat) believes that apart from waste segregation at source, public participation is equally important for the city to be clean. Vengurla is a small town having around 12,400 people and generating almost 7 tonnes of wastes daily. 100% of the wastes is segregated into three different categories at the source like the wet, dry and hazardous. The wet waste is used for biogas generation producing electricity that powers machines used in the waste management facility. The dry waste is further segregated into 19 different types based on its reuse. All the nonrecyclable plastic is shredded, mixed with bitumen and used in road building making the roads more stronger. It was Mr. Kokare who implemented this in the town and transformed the waste landfill into waste management park. His management strategy simply involved taking rounds around the city just before coming to the office and while returning home, in order to see if the city is clean. He also motivated his subordinates to do the same! He and his subordinates personally talked with a certain number of people daily to educate them about the importance of waste segregation.

Pune being an urban area having educated and active citizens is still struggling with segregation of wastes at the source into just wet and dry. Disposal of all the wastes is another issue completely. Our landfill sites are overused and people staying around the sites have to cope up with the nuisance. I cannot understand where does the problem lie? Are we not taking the Swach Bharat mission seriously?

But then I feel people's participation is missing? Can the responsible citizens among us take inspiration from Mr. Kokare? Can we  educate each other about the importance of cleanliness in our surroundings in order to ensure a disease free locality? Can we advocate for segregation if we see someone not segregating the waste? Can we cooperate or coordinate with our local officers to ensure that our areas are clean? Can we ensure segregation of wastes into wet and dry and keep our sanitary wastes separately to ensure the hygiene of the waste collectors and processors?Segregation is a crucial first step. As Mr. Kokare says, mixed waste is a nuisance but segregated waste is a wealth.

My City My Responsibility - Towards River Revival

Our city is full of role models because of which I feel fortunate to be a Puneite. These people not only motivate you but also create an awakening within you to do something for the city.

One such personality is Mr. Vinod Bodhankar. He began with a citizens movement with the One hour per week for the city - an initiative to clean the garbage that other people throw around the nalas/streams or rivers. He believes that River is our mother and to ensure that our rivers are clean we need to understand that the waste we throw 'away', goes nowhere but right into our rivers polluting them.

Later on, he initiated the SagarMitra Abhiyan in 2011 with the help of 150 students where each student had to collect plastic from his household for a month and get it to the school where it was then purchased by the Plastic Manufacturers and Recyclers for recycling. This initiative spread rapidly in the city through various schools and in six years i.e by Jan 2017 almost 4.8 lakh citizens of Pune city adopted the waste plastic segregation at source. Around 50 tons of plastic was fetched and given for recycling at zero cost of recollection and transport.

From his work, it is very clear that awakening among mind and heart is required in order to awaken the hand for action. For the same, this Abhiyan focused on understanding a basic ideology that land slopes into stream, stream slopes into a river and a river slopes into an ocean. Hence when you throw plastic waste on land it ultimately goes into our oceans where the life below water suffers. We do see images where plastic is found in the stomach of the fishes and turtles by killing them. Sometimes resulting in even extinction of some species of fishes and destruction of some ocean ecosystems.
Awakening among the school going children with the help of this basic concept has impacted in segregation and collection of huge volumes of plastic waste from their homes to recycling. The sense of responsibility, understanding, involvement and service that the children have shown through this act can be easily replicated by all of us.

If each of us decide to segregate only plastic from our household (which can be easily done) and send it to recycling. We will be contributing towards river revival and can save our rivers and the life below water for sure. Lets act upon it.

My City My Responsibility - Development versus Environment

Our city is witnessing varied developmental challenges that threaten the very environment of the city both socially as well as ecologically. Few of the development issues that we are facing today is the construction along the riverside and dumping debris and untreated sewage into the river. Allowing construction in the Green and no development zones, de-reserving plots from a bird sanctuary and opening it up for construction and illegally shifting the blue and red flood lines of our river to allow construction etc. This is indeed a threat to our natural resources i.e land, rivers and biodiversity.

I am seriously worried about our development that doesn't account for our environment. I am not against any new development in our city. I mean that we are in an era of Sustainable Development, where Environment and Development should go hand in hand. For the same, a lot of thought has to be put from social, environment & climate change and economic perspective, while considering any development in the city. With Sustainable Development Goals (SDGs) that we have in front of us to be met by 2030. We as citizens need to understand what is sustainability and act as watch dogs to see that our government is indeed adhering to it. We as citizens have the right to ask our developers about their decisions time and again.

However this is one side of the coin on the other hand its time that our bureaucrats understand sustainability and start incorporating it. They should take conscious efforts to study the area before undertaking any sorts of development in that area. A lot of brainstorming needs to happen in order to understand the socio-economic inequities, ecological and climatic conditions of that area. Meanwhile it is important to maintain transparency as well by publishing the information online for local and national level experts and scientists for scrutiny. With the smart technology that we have today its very handy to share information and make right use of the same. Its quite feasible to accelerate this process through the use of technology even though it is time consuming. Since today's development projects are not full proof, it activates the environmental enthusiasts opposing the same which results in delay of the project as well as enormous financial losses. Ultimately its the common man who has to bear the burden through price hikes or taxes.

As citizens its in our hands to be the guardians of our city and accordingly envision our city. We have the right to ask our local authorities about our surrounding development.

Posted by pournima at 7:21 PM No comments: