In continuation to the survey data series, water supply is discussed in this part.  Check the previous blogs here.

Water is supplied by Pune municipal Corporation (PMC). The source is Khadakwasla Dam, across river Mutha constructed in Mawal taluka of Pune district. The dam is located at a distance of 12 km from Pune city. It has replenishments from other dams such as   Panshet, Warasgaon and Temghar, located upstream.

All the surveyed households in Ghole road ward had access to an individual water tap or community tap. In addition to PMC water, 14% HH depend on borewells and 4% depend on tankers for additional water supply in the surveyed area. 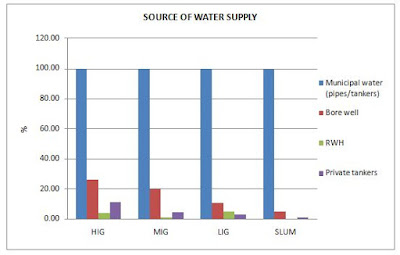 The survey was conducted in May – June 2016 and during that time Pune was reeling under water shortage.  PMC was supplying water to the city on alternate days as per the water cut schedule started from  October 2015 citing less storage in dams due to poor monsoon. During the survey period, the official water supply hours were 4 hours on alternate days.

But during the survey, it was found that a large section of LIG and slum colonies get 24 hrs water supply ( as seen in the graph). As per the dwellers, this was unofficially provided by the elected representatives and in low lying areas. 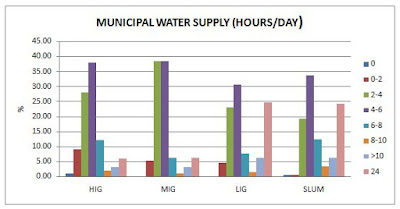 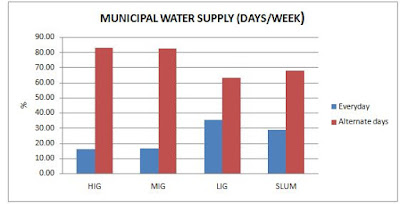 Even though the municipal water supply was only for 4 hours, most of the houses/ apartments/flats store water in over head tanks and get water 24 hrs (more than 80% households) . Some housing societies had self-imposed restrictions of 6-8 hours per day, to properly manage the stored water. But almost all societies had a good number of water supply hours, as far water available through taps in the house is concerned. Overall the level of satisfaction with water was found to be good in Ghole road ward.

Since there is no water meters for domestic connection in Pune, the per capita water usage could not be found for the households. As per PMC report (Smart city document), Pune receives 194 litres per capita per day water supply.

WATER WOES:
Even though the per capita water supply shows good 194 lpcd as against the standard 135 lpcd, it not uniform across the corporation area. Villages added to PMC in 1997 on the periphery of municipal limits are still suffering under acute water shortage and it is the water tankers that cater drinking water supply on a regular basis.  Also every summer, the problem gets worse.

Irrigation department has granted Pune a supply of 11.50 TMC water annually against which the city consumes 14.5 TMC. This is a measure cause of tension between the agriculturists in the surrounding area and the city dwellers. The demand for water from the city is on rise and water management should be a high priority in the development issues.

Smart city mission proposes 24*7 water supply with 100% metering for domestic and commercial connections within 5-10 years. Leakage detection in pipes and water audits are also planned in short term.  Metering is a positive step towards demand management coupled with slab rates that demotivates excessive water usage. Development Plan for Pune proposes measures to augment the supply source and better transmission and distribution. Since 2007, PMC has made rooftop rainwater harvesting mandatory for all new buildings. A 5% concession is given for implementing it. But Data over the last few years shows the above incentive is not lucrative enough to motivate people in that direction. If municipal water supply is to be available 24*7, it further demotivates people from investing in either rainwater harvesting, or waste water treatment and reuse. Another unanswered question in this context is - Is there any relationship between the Development Plan measures to augment water availability for the city with the Smart City Mission target of 24*7 water supply?

In continuation to the series on survey data, housing is discussed in this part. Housing is analyzed with respect to structure condition, building typology, housing tenure and size.

Of the surveyed Slum population, 58% has semi pucca houses and 30% kaccha houses. Less than 20% slum has pucca houses. In slums, most of the houses are erected by the family members themselves with temporary/ semi permanent materials.  On the contrary, LIG group shows a good trend with almost 80% living in pucca houses.

Housing tenure shows more than 68% residents of all categories own houses. People with rented housing are migrants to city, either new arrivals or are here for a short stay. For most of LIG and slums, rented housing is mostly temporary and in many cases illegal settlements.

The above summarises the data related to housing that we obtained from surveys, but there were also some general observations. For example, while slum houses are not very well-built and congested, many of them are equipped with fairly modern amenities inside. The main complaint from the slum and LIG populations is lack of options for housing within affordable budget range, and in the neighbourhood where they are currently located.

A look at advertisements from construction companies, and general observation of the type of constructions ongoing in and around Pune also justifies this complaint. Housing complexes being constructed in the so-called 'prime' locations (close to city centre, main business areas, etc) are targeted at the HIG and to some extent MIG families. The low income families are increasingly being forced to move to the periphery or even outside the municipal limits if they wish to look for better housing that is in line with their lifestyle and budget. Housing finance options available to these groups are also extremely limited. This, coupled with the poor public transport systems, adds to the hardships faced by these families.

Anu Kuncheria
Posted by Unknown at 9:07 AM No comments: