My City My Responsibility - Youth for Climate action Part I


I am very excited to share with you the insights of a Youth Conference that I attended last week in Ahmedabad, Gujarat. It was the Local Conference for Youth (LCOY 14) for South Asia region hosted by Centre for Environment Education (CEE) in Ahmedabad. The theme of this conference was what actions the youth of the country can take in order to have a low carbon future. Students, budding environment entrepreneurs, researchers, PHD scholars and professionals from all over India and Bangladesh participated in this conference. Being a South Asia regional conference participants from Nepal, Afghanistan and Pakistan were also supposed to attend but couldn't make it this time. So we were a cozy group of around 30 Climate enthusiasts for the conference.


As a researcher working in the field of Climate action I have been curious about what exactly happens at the Conference of Parties (COP) especially after the  COP21 at Paris that led to a landmark agreement bringing all the nations together to combat climate change and accelerate actions for a sustainable low carbon future. When I heard about LCOY last year my curiosity had been awakened. and I wanted to know more about it. That's when I learnt that Conference of Youth (COY) happens within the United Nations Framework Convention on Climate Change (UNFCCC) and aims at engaging youth for understanding the climate negotiations happening at the global level in COP and strengthens the capacity for actions at the local level.

LCOY provides an opportunity where all the initiatives and research happening at local level towards climate change impacts are discussed, compiled and presented at the GCOY i.e the Global Conference for Youth. The GCOY takes place before or during the COP every year. This year GCOY will be happening around 29th November ahead of COP24 in Katowice, Poland. I am glad that I could attend LCOY this year and could share our work on climate vulnerability and low carbon lifestyles choices. I really hope these suggestions get discussed in this year's COP.

At the COP, LCOY India is endorsed by YOUNGO which is an official constituency of UNFCCC and is a dynamic network of individuals and organizations focused on youth for climate action. YOUNGO has been accredited a status of  'Observer' at the COP and presents all the inputs from the LCOY's at the GCOY.  It was overwhelming to meet the south coordinator of YOUNGO - Yugratna Srivastava  in this conference.

On the first day, after all the introductions and background, one of the activities involved role playing. Here we actually got a hang of what happens at the COP through mock climate negotiations. We all were grouped as different regional groups known as Party Groupings. The regional groups include G77+ China - a group that comprises of developing nations (India is included in this group), the like minded developing countries (LMDC's), Least Developed Countries (LDC's) and the Small Island Developing States (SIDS) - one of the biggest group of nations. Then there is the African Group of Negotiators, the EU group comprising 28 member states of European union, an Umbrella group consisting of US and Russia predominately, the Environmental Integrity group comprising the Mexico, Korea and Switzerland etc. While there are some non party groups as well known as the Observers which includes all the non formal associations like NGO's, activists, professionals etc.

I was a part of the G77+China group where we all had to advocate for the voices of the LMDC's who were struggling to just survive in the face of the climate change impacts, to other climate negotiators. We had a great debating session. I realised how important it is to have knowledge of country statistical data in putting forth one's point strongly. Moreover, I realized that the job of a negotiator representing his/her country is highly critical, knowledge based, political, diplomatic and absolutely risky. There may be more to it for sure. I also realised how tricky it is to come to a consensus for any single given issue. The mock took almost two hours for us as party groups, to come to a consensus on the single issue of deciding what should be the limits for the global temperature rise in this century. Should it be below 2 degree Celsius or  well below 1.5 deg Celsius??? Tuff job!

I am going to write more about my reflections on the other sessions at LCOY, some highlights and views on the Sabarmati riverfront development and the city of Ahmedabad in general in my next blogs. Stay tuned!

My City My Responsibility - Change in Biodiversity

In continuation with my last blog on green cover analysis of Pune city, under our Sustainably Smart Pune study we correlated the bird biodiversity data available from RANWA's website in order to check the status of biodiversity in the city. Though the data available on RANWA is dated back to 1999 it served as a good starting point for analyzing the population trend among birds in Pune.

Considering the vastness of the subject, our biodiversity analysis was limited to only bird species of Pune city based on the information available on RANWA. On analyzing the data given on the website, it was found that resident bird species that were seen commonly in the city showed occasional occurrence and a declining trend in population due to loss of habitats like forests, scrubland and agriculture. These habitats were lost due to its conversion to either plantation or habitation, as we saw in the last blog, we have completely converted the original landscapes in the span of just 50 years.

Birds like Buzzard and Crested Hawk Eagle commonly seen around the forests of Pune are nearly gone. Common Grey Hornbill, House Sparrows and House Crows seen abundantly also showed a declining trend. Whereas birds like Blackwinged Stilt that are seen near polluted water can be seen abundantly along our rivers. Jungle Mynas, Jungle Crows and Red Whiskered Bulbuls are showing an increasing trend along with the Common Pigeons that we see everywhere.

Urbanization is one of the major reasons for these habitat conversions and plantation of non native trees on the hills of Pune is another reason for the change in the biodiversity. Native tree plantation and local restoration and conserving techniques can indeed help in enhancing the biodiversity of our city.

Seeing the big picture, our project basically aims at defining an approach for planning a Sustainably SMART city and this sample study is a very minute part of biodiversity analysis. Hence there is a need to holistically analyse the entire biodiversity cover of the city and for that we need a systematic and updated database of the city's biodiversity that includes all the flora and fauna, which is a mammoth task. Nevertheless sources like RANWA can be updated by integrating data from other available data sources after authenticating the information through field level experts and scholars, also integrating data from PMC like that of tree census etc. All the available data can be clubbed into a single platform as an open source. Thus taking the first step to understand the biodiversity cover of the city and then charting an action plan based on the biodiversity status towards a Sustainable city that cares for its biodiversity, has to be the way forward.

My City My Responsibility - Celebrating a Sustainable Diwali

A festival full of colors and lights when celebrated in the light of conscious actions towards our environment can be much more meaningful.

Starting from cleaning our houses, putting a handmade lantern by involving everyone in the house, or just putting a bamboo lamp, delicious home made preparations or locally purchased food items, beautiful rangoli, cracker free, local earthenware diyas lit all over the house, family get togethers and bonding, using arecanut leaf disposable cutlery, minimizing wastes and disposing appropriately etc and many more such actions are all part of Sustainable Diwali that considers our local resources, our people, our rich culture and heritage and lastly our environment.


Here's wishing you all a Happy and Sustainable Diwali!!! 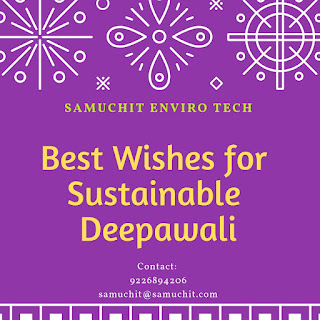 Posted by pournima at 9:38 AM No comments: